Officially and hopefully, right now, the Greek Choirs promoted through Greek Choirs & Festival are more than 100, while the Festivals are almost 20. Is you choir in the list? Can those looking for choir or festival to find it?

For historical reasons let us keep a snapshot and meet both the Festivals & the Choirs: Συνέχεια… | More… 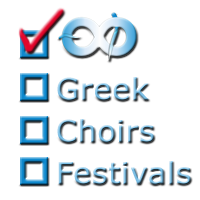 4-7 minutes maximum from your time are enough so you can contribute to the effort and guide the next moves towards the improvement of the available options offered by Greek Choirs & Festivals.

If for any reason you face difficulties you may fill in the questionnaire directly at google forms by clicking here. Συνέχεια… | More…